After more than 11 years, Nutrition Australia has updated our food pyramid, now known as the Healthy Eating Pyramid, to reflect a more pragmatic and modern approach to our nutritional intake.

This new pyramid aims to visually depict how to:

Why Update the Food Pyramid?

Traditionally the food pyramid has been used as an educational tool. It visually depicts how eating different foods can assist in achieving dietary balance. A primary concern was that for many years breads and cereals filled primary space on the food pyramid.

This made little sense from a kilojoule (energy intake) and nutrient perspective as over the years we have seen more and more people gaining weight as a result of diets rich in processed carbohydrates.

Hence the previous 2004 pyramid – especially as an educational tool, was now obsolete.

A Word on Discretionary Foods

Discretionary foods, of which Australians get more than 30% of their kilojoules from every day, have been completely dropped for the 2015 food pyramid.

Discretionary foods are foods that are not necessary for a healthy diet and are too high in saturated fat and/or added sugars, added salt or alcohol and low in fibre. These foods and drinks can also be too high in kilojoules. Essentially these foods are ‘energy-dense’ but ‘nutrient-poor’ and can take the place of other more nutritious foods. The higher levels of kilojoules, saturated fat, added sugars, added salt and/or alcohol that they contain are associated with increased risk of obesity and chronic disease such as heart disease, stroke, type 2 diabetes, and some forms of cancer.

The problem with including/ allowing these foods in any diet is that they can become a convenient means of interpretation and inclusion according to the individual.

Importance of Vegetables and Legumes

The 2015 pyramid sees vegetables hold their rightful place at the bottom of the pyramid with a noticeable lesser focus on carbohydrates.

Vegetables (with the exception of potatoes, sweet potato and corn) generally contain very few kilojoules. A high intake of vegetables or 10-13 serves per day is closely linked to reduced risk of developing a number of lifestyle diseases, including some types of cancer, heart disease and diabetes. A diet rich in vegetables is also linked to weight control long term. With just 7% of Australians getting their recommended daily serves of vegetables, the focus of the dietary pyramid should always have been on vegetables.

Legumes (chickpeas and lentils) are included as both a protein (for vegetarians), as well as with the vegetables, thanks to their high fibre content.

Grains have now replaced the traditional bread and cereal group. Reducing the recommended proportions of carbohydrate-rich foods is an important step in the right direction for nutrition education.

While it is true that wholegrain carbohydrates are nutrient rich they are also energy dense. If an individual is sedentary they obviously need far fewer of them. Wholegrain carbohydrates feature predominantly in this section, some refined examples such as cous cous, are included to cater for Australians broadening tastebuds and multicultural societies.

The upper two levels of the new pyramid features dairy and alternatives, meat, nuts and seeds and healthy oils. There is an emphasis on good quality oil, with margarine and butter being omitted but the required proportions of dairy, meats, nuts and seeds are accurate.

In the 2015 Healthy Eating Pyramid, each layer is separated into the specific foods groups, to provide a greater level of detail, while still retaining the original Pyramid structure.

The top layer now refers to healthy fats only and reflects what we should eat in a day i.e. we do need small amounts of unsaturated fats every day for good health. 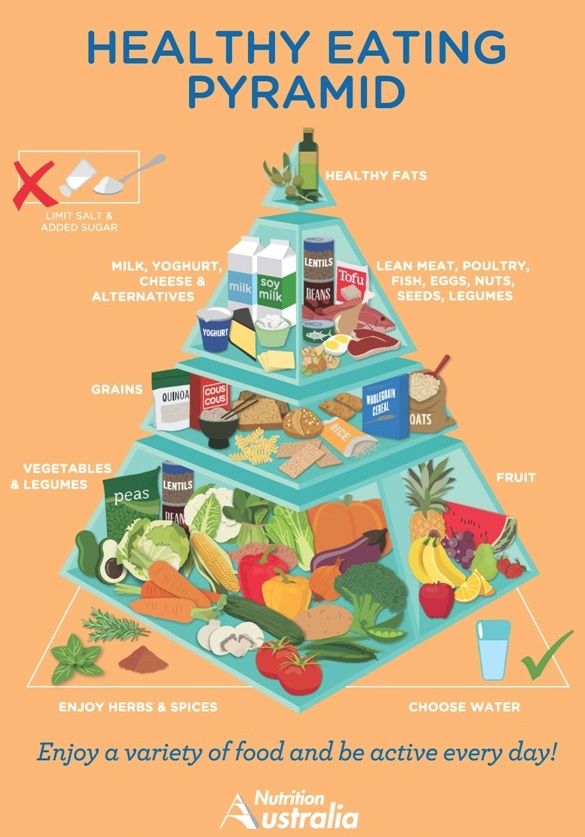 Compared to the 2004 Food Pyramid

The previous food pyramid was updated in 2004.

It separated food into three layers:

Sugar Has Been Moved

The Pyramid has always included a salt shaker with a cross through it, to advise Australians to limit the amount they consume.

In 2015 Nutrition Australia removed added sugar from the top layer and added it to the salt shaker to convey the importance of limiting added sugars as well. Added sugar is mostly consumed in ‘energy dense, nutrient poor’ foods and drinks like confectionery, sweet baked goods and sugary drinks.

Spices and Herbs are Included

Enjoying nutritious food is the key to maintaining healthy eating habits for life. Fresh, dried or ground herbs and spices are an easy and affordable way to add flavour to meals instead of using sugar or salt. This is a new added detail to the Healthy Eating Pyramid.

Physical Activity Has Been Removed

In 2004 a ‘Move more’ layer was added to the bottom of the Pyramid to promote the role of physical activity in maintaining good health.

In 2015 the ‘Move more’ layer is removed to renew the focus on food and nutrition as the essential message of the Pyramid. However  physical activity is still promoted with the new tagline ‘Enjoy a variety of foods and be active every day’.

After removing the ‘Move more’ layer in 2015  the Healthy Living Pyramid of 2004 is renamed to reflect the renewed focus on food and nutrition messages.

The new Healthy Eating Pyramid portrays a very positive message about the types and proportions of food we should aim to eat each day, as the foundation of a healthy and balanced diet.

Final Word on the 2015 Food Pyramid

Firmly at the bottom of the pyramid (and for a good reason) the final word is: eat more vegetables and you will be on the right track.

This is a realistic food pyramid that reflects Australians ever evolving tastes and nutritional requirements.

This food pyramid allows for a tasty, nutritious, varied and exciting diet.

It acknowledges that sedentary people should restrict an excess of carbohydrates to reduce the risk of consuming an excess of kilojoules.

Even allowing for food allergies and sensitivities such as dairy and gluten, this food pyramid can still be relevant and useful.

The 2015 Healthy Eating Pyramids new slogan ‘Enjoy a Variety of Food and Be Active Everday’ is sound advice for a vast majority of Australians.