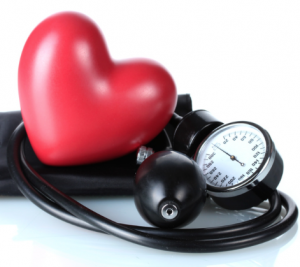 There are a surprising number of key nutrients that have been shown to be extremely useful for those with cardiovascular conditions such as hypertension.

Backed up by clinical studies some of these nutrients are well known; others may surprise you!

We all understand that the heart pumps blood around the body through the blood vessels.

Blood pressure is the amount of force exerted on the artery walls by the pumping blood and is measured in millimeters of mercury (mm Hg).  A normal blood pressure level is approximately 110/ 70 mm Hg – 120/80 mm Hg. This figure is also the ultimate goal when trying to reduce high blood pressure (HBP), known also as hypertension.

The two numbers in a blood pressure reading are the systolic and diastolic pressures.

The top number (and higher reading) represents systolic blood pressure (SBP) which measures the pressure in the arteries when the heart beats (when the heart muscle contracts).

The bottom number (and lower reading) is diastolic blood pressure (DBP) which measures the pressure in the arteries between heartbeats (when the heart muscle is resting between beats and refilling with blood).

A Word on ACE Inhibitors

Angiotensin-converting enzyme inhibitors (ACEi) help relax blood vessels. ACEi prevent angiotensin-converting enzyme (ACE) in your body from producing angiotensin II, a substance in your body that affects your cardiovascular system by narrowing your blood vessels and releasing hormones that can raise BP. This narrowing can cause high blood pressure and force the heart to work harder.

Many of the following nutrients have ACEi activity and therefore play an important role in reducing HBP.

Magnesium acts as a direct vasodilator, regulates intracellular calcium, sodium and potassium as well as pH.

It is best taken with a higher potassium/ lower sodium intake in conjunction with taurine (see below) to decrease BP.

High dietary protein intake reduces HBP as it assists in reducing inflammation; this does not include cured meat which actually increases BP.

Researchers conclude that the recommended daily intake of protein is 1.0 to 1.5 grams/ kg/day.

Both animal and plant protein intake is associated with lower average SBP and DBP. These beneficial effects of protein were apparent for men and women as well as normal weight and overweight individuals.

Higher protein diets is conjunction with higher dietary fibre led to a 59% reduction in HBP risk.

Whey protein has been shown to have  a significant reduction in BP in animal and human studies. Whey protein must be hydrolysed to be effective. It is rich in bioactive peptides with ACEi activity.

Bonita, widely used in Japan, is a protein sourced from the tuna and mackerel family. Bonita protein reduces BP 10.2/7 mm Hg in humans over 1-3 months as it has natural ACEi activity . The amount consumed was 1.5 grams/ day. It has been shown to have no adverse effects and is cost effective.

The most common and well known form of omega 3 fatty acids is sourced from oily fish.

Two components of omega 3 fish oil is the polyunsaturated fatty acids eicosapentaenoic acid (EPA) and docosahexaenoic acid (DHA). DHA has been shown to be better in reducing BP. The recommended dosage is 3-4 grams of DHA with EPA per day with a ratio of 3 parts EPA to 2 parts DHA. This has been shown to lowers BP by 8/5 mm Hg and reduces heart rate (HR) 6 beats per minute.

Dosage recommendations indicate that GLA should be taken at a dose of 50% of the total omega 3 fatty acid dose.

GLA blocks aldosterone a steroid hormone that is central to regulating BP. When this hormone is high, the risk is greatly increased for development and progression of cardiovascular disease.

Oleuropein found in olive leaf extract at dosages of 500mg twice daily for 8 weeks has been shown to reduce blood pressure 11.5/4.8 mm Hg

In conjunction with the Mediterranean diet and olive oil consumption, it may even be more effective.

Research determined that an individual need 10,000 mcg of allicin (the active ingredient in garlic) per day to have significant BP lowering effect. This is equivalent to the amount found in four cloves (5 grams) of garlic.

Wakame, is the most popular edible seaweed in Japan. Wakame has ACEi activity similar to Captopril. Captopril  is a ACEi medication commonly prescribed in the treatment of hypertension and some types of congestive heart failure.

Eating 3.3 grams of dried Wakame has been shown to reduce BP in hypertensive patients.

Clinical trials  have determined that the higher the initial BP, the greater the response. SBP reduced more than DBP.

BP reduction is further enhanced with joint use of other antioxidants such as vitamin E, lipoic acid and selenium.

Vitamin D deficiency had been shown to contribute to insulin resistance and hypertension. Vitamin D signals through the vitamin D receptor and provides vascular protection and reduces BP.

Low levels of vitamin B6 (pyridoxine) are associated with hypertension. Pyridoxine is a cofactor in neurotransmitter and hormone biosynthesis.

In calcium deficient states vitamin B6 reverses HBP. Research states that the recommended  dose is 200mg four times daily for the short term only.

There is good news for the dark chocolate fans. 100g dark chocolate with 500mg polyphenols reduced SBP by 6.4 mm Hg but there was no change in DBP. Polyphenols are micronutrients in our diet and there is a growing amount of evidence for their role in the prevention of degenerative diseases such as cardiovascular diseases.

Cocoa containing 30mg of polyphenols reduced BP in humans with pre-hypertension and stage 1 hypertension at 18 weeks by 3/3 mm Hg.

Cocoa was also shown to reduce many inflammatory markers as well as improving gut barrier function.

There is a startling deficiency of CoQ10 in 39% of hypertensive patients. CoQ10 reduces with age, disease, oxidative stress, statin use, aerobic exercise and atherosclerosis.

Supplementing with CoQ10 reduces both the dose and number of BP medications required by the individual.

CoQ10 supplementation has excellent BP reduction properties with positive effects being seen at 4-12 weeks. However these effects are gone at 7-10 days after discontinuation.

Additionally HR is decreased by an average of 5 beats per minutes (bpm).

Research has shown that 200mg of alpha lipoic acid combined with 500mg acetyl L-Carnitine twice daily resulted in a 2% increase in brachial artery diameter allowing for a reduction in both SBP and DBP.

Another study with patients who had diabetic nephropathy reported that long term alpha lipoic acid supplementation at 600mg per day for 18 months prevented increases in BP and urine albumin compared to control patients.

Clinical trials have determined that 2grams of  L-Carnitine 2g taken four times daily over a period of 22 weeks reduced SBP and DBP and HR.

Research have found that 3g of taurine taken twice daily for 7 days reduced BP by an average 9/4.1 mm Hg and is useful in HBP, arrhythmias (irregular heart beats) and coronary heart disease (CHD).

200mg/day of Pycnogenol reduced SBP by an average 7mm Hg and  DBP by 2 mm Hg.

Pycnogenol has been shown to reduce oedema, decrease BP and reduces the need for BP medications with patients who have diabetes with concurrent HBP.

It appears to partially work by protecting the cell membrane from oxidative stress and increasing vitamin C levels.

Growing research has shown that pomegranate juice and seeds have a real nutritional role to play in reducing hypertension due to its anti -hypertensive, anti -atherosclerotic, anti-oxidant and anti-inflammatory activity.

Recent studies have shown that pomegranate juice and seeds:

Sesame is another nutritional that has been shown to be useful in lowering BP. 60mg of Sesamin taken for 4 weeks in people with mild hypertension reduced BP by 3.5/1.9 mm Hg. While 2.5g black sesame meal per day over 4 weeks reduced SBP by 8.3mm Hg.

Sesame has also been shown to:

Quercetin is a substance that at dosages of 500mg twice daily can:

The list of key nutrients to reduce BP is considerable and obviously not all of them need to be or should be taken.

So what are the top key nutrients to reduce hypertension?

A combination that acts as direct vasodilators and improve elasticity is: omega 3 fatty acids, a monounsaturated fatty acid such as olive oil, potassium and magnesium.

A combination that has great ACEi activity is : aged garlic and hydrolysed whey protein.

The above list provides a great guide to a number of nutritional’s that can be included in everyday life to reduce the devastating impact of cardiovascular diseases and hypertension.