Although researchers didn’t discover the importance of this trace mineral until 1979, selenium quickly gained prominence as a potentially powerful cancer fighter. Many experts now believe it could prove to be one of the most important disease-fighting nutrients.

A trace mineral that is essential to many body processes, selenium is found in soil. Selenium is present in virtually every cell in the body, but it is most abundant in the kidneys, liver, spleen, pancreas and testes.

Selenium acts as an antioxidant, blocking the rogue molecules known as free radicals that damage DNA. It’s part of an antioxidant enzyme (called glutathione peroxidase) that protects cells against environmental and dietary toxins, and is often included in antioxidant ‘cocktails’ with vitamins C and E. This combination may help to guard against a range of disorders – from cancer, heart disease, cataracts and macular degeneration to strokes and even ageing – that are thought to be caused by free-radical damage.

Selenium has received a lot of attention recently for its role in combating cancer. A dramatic five-year study conducted at Cornell University and the University of Arizona showed that 200 mcg of selenium daily resulted in 63% fewer prostate tumours, 58% fewer colorectal cancers, 46% fewer lung malignancies and a 39% overall decrease in cancer deaths. In other studies, selenium showed promise in preventing cancers of the ovaries, cervix, rectum, bladder, oesophagus, pancreas and liver, as well as leukaemia. Studies of cancer patients indicate that people with the lowest selenium levels developed more tumours, had a higher rate of disease recurrence, a greater risk of cancer spreading, and a shorter overall survival rate than those with high blood levels of selenium.

Additionally, selenium can protect the heart, primarily by reducing the ‘stickiness’ of the blood and decreasing the risk of clotting – in turn, lowering the risk of heart attack and stroke. Moreover, selenium increases the ratio of HDL (‘good’) cholesterol to LDL (‘bad’) cholesterol, which is critical for a healthy heart. Smokers or those who’ve already had a heart attack or stroke may gain the greatest cardiovascular benefits from selenium supplements. In high doses, selenium is available on prescription in Australia and New Zealand.

Selenium may be useful in preventing cataracts and macular degeneration, the leading causes of impaired vision or blindness in older people. It is also vital for converting thyroid hormone, which is needed for the proper functioning of every cell in the body, from a less active form (called T4) to its active form (knwon as T3). In addition, selenium is essential for a healthy immune system, helping the body to defend itself against harmful bacteria and viruses, as well as cancer cells. Its immune-boosting effects may play a role in fighting the herpes virus that is responsible for cold sores and shingles, and it is also being studied for possible effectiveness against HIV, the virus that causes AIDS.

When combined with vitamin E, selenium appears to have some anti-inflammatory benefits as well. These two nutrients may improve chronic conditions such as rheumatoid arthritis, psoriasis, lupus and eczema.

How much you need

The RDI for selenium is 85 mcg for men and 70 mcg for women. To produce major benefits, up to 600 mcg a day may be needed.

If you get too little: The average diet in Australia and New Zealand tends to be low in selenium. Falling below the RDI may lead to higher incidences of cancer, heart disease, immune problems, and inflammatory conditions of all kinds, particularly those affecting the skin. Insufficient amounts of selenium during pregnancy could increase the risk of birth defects (especially those involving the heart) or, possibly, sudden infant death syndrome (SIDS). Early symptoms of selenium deficiency include macular weakness and fatigue.

If you get too much: It’s hard to get too much selenium from your diet, but if you’re taking this mineral in supplement form, it’s important to remember that the margin of safety between a therapeutic dose of selenium (up to 600 mcg a day) and a toxic dose (as little as 900 mcg) is small compared with other nutrients. Symptoms of toxicityinclude nervousness, depression, nausea and vomiting, a garlickly odour to the breath and perspiration, and a loss of hair and fingernails.

Most experts agree that the optimum dose for long-term use of selenium should fall between 100 mcg and 400 mcg daily. Up to 600 mcg daily may be taken for a limited time as a treatment for viral infections or as part of a cancer treatment program.

Vitamin E greatly enhances selenium’s effectiveness, so be sure to get 500 IU of it daily.

The most abundant sources of selenium include Brazil nuts, garlic, seafood, poultry and meats. Grains, particularly oats and brown rice, may also have signficant amounts, depending on the selenium content of the soil in which they were grown.

Don’t exceed recommended doses. In some people, taking selenium long term – as little as 900 mcg a day – can cause serious side effects, such as skin rashes, nausea, fatigue, hair loss, fingernail changes and depression.

Reminder: If you have a medical condition, talk to your doctor before taking supplements. 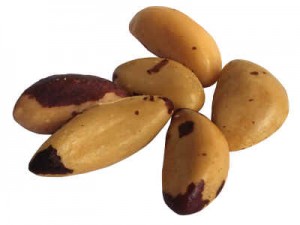 A brand new study has shown that selenium could be your most potent ally against cancer.

This trace element has eluded researchers for decades with it’s beneficial effects, exhibiting extraordinary results in a multitude of trials.

Now, according to a new Australia study, this cancer-combating ingredient has now shown amazingly valuable results by dramatically cutting the incidence of bowel cancer – an illness that kills thousands of Australians every year.