Hide More Links
Emed > Circulation and Heart > Welcome to Australia! Introducing Methyl B9 and B12

Welcome to Australia! Introducing Methyl B9 and B12

In exciting news for Australia and our natural health industry, the Therapeutic Goods Administration (TGA) has recently granted approval to use methyl B9 and methyl B12 in our supplements.

Many practitioner brands have used this approval as an opportunity to upgrade existing products or formulate new ones.

Why do we at Emed consider this approval so important?

Simply put it boils down to increased availability and utilisation thereby maximising the therapeutic value of these important nutrients.

5-methyltetrahydrofolate (5-MTHF) is now legally listable in Australia after an application with the TGA.  It is a big win for the industry and Metagenics (Health World) was the company who drove the application, allowing the rest of us to benefit.

5-MTHF is the most active metabolite of folic acid (vitamin B9) due to its ability to bypass all of the enzymatic activation steps in the conversion of folic acid to the biologically active 5-MTHF.

The use of 5-MTHF to replace folic acid in treating MTHFR genetic defects in particular, reduces the risk of masking symptoms of vitamin B12 deficiency ( as evidenced in blood), reduces interactions with medications inhibiting the enzyme dihydrofolate reductase, prevents formation of unmetabolised folic acid in blood circulation and overcomes metabolic defects caused by the MTHFR mutations. 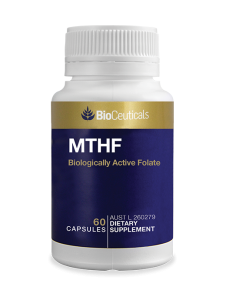 As 5-MTHF is directly utilised by the body it supports:

Vitamin B12 is involved in a number of vital processes including:

This improved utilisation is indicated by human urinary excretion of methylcobalamin which is about one-third that of a similar dose of cyanocobalamin, indicating substantially greater tissue retention. In the blood, methylcobalamin comprises 60-80% of total plasma cobalamin.

Vitamin B12 is the cofactor in enzymatic reactions and has a number of important functions. It is required for the conversion of methylmalonyl CoA to succinyl CoA, as well as the conversion of homocysteine to methionine by methionine synthase, which is then converted into S-adenosylmethionine.

A B12 deficiency causes impairments in both of these important pathways. Consequently neurological function is disrupted (including poor formation of myelin nerve sheaths),  there is production of toxic levels of homocysteine and inefficient energy production in all cells.

As a consequence, B12 deficiency affects the growth, function, and repair of all cells, the most apparent sign of which is megaloblastic anemia, caused by inhibited mitosis of red blood cells.

One of the ways in which B12 is absorbed is by passive diffusion across mucosal membranes. B12 sublingual (under the tongue) supplementation is therefore an effective delivery method and carries the added benefits of lower cost and ease of administration.

Sublingual B12 is suitable for population groups at increased risk of vitamin B12 deficiency, including the elderly, those with malabsorption issues, poor dietary intake, those with a fear of needles and vegetarians.

The dosage for clinical effect is 1000-6000mcg per day. No significant therapeutic advantage appears to occur from dosages exceeding this maximum dose.