Generation Fat – Why Our Kids Won’t Outlive Us

Obesity is starting to take a serious toll on our life expectancy, according to research published in the New England Journal of Medicine.

The kids of today will be the first generation expected to have shorter lives than their parents.

The study found that life expectancy will be reduced by an estimated 5 to 20 years for people that are severely obese.

Obesity is being called an epidemic, both in the U.K, USA and Australia. World wide, approximately 43 million children under the age of 5 are obese and 1 in 10 children are overweight.

“Obesity is such that this generation of children could be the first basically in the history of the Western Civilisation to live less healthful and shorter lives than their parents,” said Dr. David S. Ludwig, director of the obesity program at Children’s Hospital Boston, and one of the authors of the report.

“We’re in the quiet before the storm,” Dr. Ludwig said. “It’s like what happens if suddenly a massive number of young children started chain smoking. At first you wouldn’t see much public health impact.”

He added, “But years later it would translate into emphysema, heart disease and cancer.”

“There is an unprecedented increase in prevalence of obesity at younger and younger ages without much obvious public health impact,” Dr. Ludwig said.

“But when they start developing heart attack, stroke, kidney failures, amputations, blindness, and ultimately death at younger ages, then that could be a huge effect on life expectancy.” 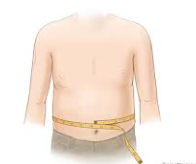 While the primary blame for the rapid expansion of our children’s waistlines is being put down to high energy food intake and lack of physical activity, there are also more subtle physiological differences which influence this epidemic.

Other factors that can increase childhood BMI include:

Recent research has also linked children with overweight or obese parents to be at a higher risk of being obese themselves.

More interestingly though, if the mother is obese then the risk of the child developing obesity in their adult years is more than doubled.

Studies show that the unhealthier the food, the more aggressively marketed it seems to be.

Health experts are now demanding total bans on the marketing of unhealthy foods to tackle the nation’s ballooning bellies.

This new research does not surprise me but we cannot throw our hands in the air and figure this is hopeless. We are at the point where we can change the future health of our children.

Telling your child that they need to lose weight can be a hard conversation to have when you’re a parent. Some fear that it will push a child into an eating disorder and have negative effects on their self esteem.

Parents need to come to terms with the fact that the home environment is a powerful influence — kids aren’t going to eat better unless their home environments are cleaned up.

For a lot of parents, that’s really hard to do, but you can’t have Mum and Dad sitting on the couch, munching on peanut M&M’s and saying no to their kids.

By encouraging healthy nutrition and exercise practices in an early age, they will take these principles through to adulthood and go on to live long and healthy lives.

A low-carbohydrate, high protein diet has been shown to be the most effective diet for weight loss in obese school age children and can be safely used in children as young as 6 months.

Our Weight Loss Program for Children is an easy-to-follow, scientifically advanced, fat loss program based on low GI and ketogenic principles.

Three basic principles of this program include good levels of protein, appropriate levels of healthy fats and moderate exercise to support rapid and lasting fat loss.

The Children’s Body Composition Shake is a meal replacement shake for kids. Protein has been proven to increase the hormones cholecystekinin (CCK) and peptide-1 (GLP-1) that are responsible for telling your brain that you are full.

Which means that they will feel fuller for longer and feel more satisfied after a high protein meal.

Obese children have been found to have lower serum vitamin D concentrations. The higher the vitamin D levels, the lower the fat mass has also been found.

Low vitamin D levels can also result in an increase in insulin sensitivity and is a risk factor for glucose intolerance – paving the path of diabetes.

Time in front of the television, computer and gaming consoles has taken priority over outside time for kids.

Limit screen time to 1-2 hours per day. Encourage outside time by getting the family together for a walk after dinner, have a BBQ down at the local park or suggest they walk the family pet on a daily basis.

Motivating your child can keep them on the right track to reach their weight loss goals.

There are different ways to make weight loss fun, these include:

There is good news: We’ve found that kids lose weight when parents are on the same program. The most successful weight loss programs for kids are called “family weight control” plans.

Mum and Dad, even if they don’t have weight problems, have to go through the same program as their kid and learn how to encourage and participate in exercise, and how to eat healthily in restaurants.

If a parent is on a program, their child will be more excited about it and won’t feel singled out.