If you haven't had gum problems yet, you probably will: three out of four adults over the age of 35 experience tender, swollen or bleeding gums at some point in their lives. But there are plenty of things you can do to relieve the pain, heal your gums and preserve your teeth.

There are two main types of gum disease: gingivitis and periodontitis. Gingivitis – marked by tender, inflamed gums – occurs when bacteria in the mouth form a thin, sticky film, called plaque, that coats the teeth and gums. If ignored, plaque turns into tartar a hard mineral shell that erodes gum tissue. Over time this leads to a more serious condition known as periodontitis, which is harder to treat. In advanced periodontal disease, the gums recede, allowing bacteria to eat away at the bone anchoring the teeth.

Poor oral hygiene – including poor brushing, flossing or rinsing – is the leading cause of gum disease. Other precipitating factors include a diet high in sugar, a lack of vitamin C or other nutrients, and smoking. (The chemicals in tobacco smoke harm gums and teeth.) In addition, certain medications can make gum disease worse because they inhibit saliva production, which helps wash away bacteria and sugars. Genetic factors probably make some people particularly susceptible to gum disease. Women seem to be more prone to gum problems during pregnancy and menopause because of hormonal changes. Diabetes and other chronic diseases that can lower resistance to infection also increase the risk.

Various supplements, used together, can help to heal sore and bleeding gums. Benefits should be noticed within two weeks. People at high risk of gum disease can also take them long term to help prevent problems.

Consumed orally every day, vitamin C, flavonoids, and coenzyme Q10, all of which are powerful antioxidants, protect gum tissue against cell damage and speed healing. They also boost immunity, helping to keep gum-attacking bacteria in check. Studies of coenzyme Q10, for example, show that it reduces the depth of pockets formed around the teeth by bacteria. This stabilises the teeth and aids in shortening the recovery period after dental surgery. Other studies suggest that vitamin C and flavonoids may strengthen connective tissue in the gums and decrease inflammation, and that they are more effective when used together. In addition, folic acid helps to repair gum tissue.

Various topical therapies may reduce gum inflammation and bleeding. Every other day, break open a vitamin E capsule and rub the oil on the inflamed tissue to sooth the area and promote faster healing. Alternate this with gently brushing along the gum line with a buffered form of vitamin C powder, such as calcium ascorbate, using a very soft toothbrush. These topical treatments should be carried out twice a day, after regular tooth cleaning.

Calcium fluoride dramatically cuts the risk of tooth decay in children. The trace mineral fluoride interacts with tooth enamel and hardens it, making it 50-70% less susceptible to decay. 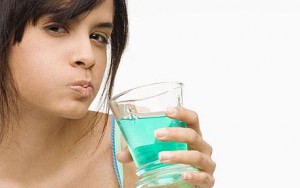 A New York company that manufactures a mouth cancer detection test kit is suing Johnson and Johnson, the makers of Listerine mouthwash.

Oral Cancer Prevention International (OCPI) claims that Johnson and Johnson interfered with their distribution contract of the test kits.

OCPI argue that Johnson and Johnson hamstrung their sales of the kit to protect the image of one of its best sellers; Listerine.

But why? The controversy continues as Emed goes behind the label…