x
Emed > Conditions > Toxins and Diseases > Toxic Ingredients > Are You Being Poisoned By Your Drinking Water?

Are You Being Poisoned By Your Drinking Water?

Water is essential for human health and wellbeing. It has an amazing capacity for healing and we know that without water, life on earth wouldn’t exist.

Unfortunately, getting your 6-8 glasses daily isn’t all you need to worry about when it comes to water, as the quality of the water you consume has a significant impact on your health.

Unbeknown to many of us, unfiltered tap water can cause serious health problems due to fluoridation, chemical treatments and contamination of public water supplies with a range of toxic substances.

Artificial water fluoridation was introduced over fifty years ago as a means of preventing population-wide dental decay.

It has now become a controversial topic with evidence showing that fluoridation has become an outdated and potentially dangerous practice.

Contrary to past beliefs attributing significant declines in children’s dental decay to the introduction of water fluoridation in some countries, it is far more likely that improved dental hygiene and better nutrition were responsible for improvements in dental health, as similar declines in dental decay have also been observed in non-fluoridated countries.

Furthermore, current evidence shows that any potential dental benefit of fluoride occurs as a result of moderate topical application to teeth, not chronic ingestion through water.

Water fluoridation practices have already been discontinued in most European countries for ethical and safety reasons, however it still occurs in a number of countries including the US, Australia, Canada and NZ.

Another major problem with artificial water fluoridation is the lack of control over fluoride concentrations reaching the end consumer- us.

Regulatory bodies establish upper limits for fluoride levels in our water supplies to avoid toxicity, however fluoride can also enter public water systems from industrial emissions and pollution, natural sources including runoff from weathering of fluoride-containing rocks and soils, and leaching from soil into groundwater.

As a consequence, some people are exposed to far higher fluoride levels than others. This is especially harmful for infants and children who are already exposed to more fluoride for their body size- relative to adults, and are more likely to suffer adverse effects.

Chronic or excess exposure to fluoride, especially as children, can cause an irreversible condition known as dental fluorosis. Effects of dental fluorosis range from mild discolouration of the tooth surface to severe staining, enamel loss and pitting of teeth.

Dental fluorosis is not just a cosmetic condition as severe fluorosis ironically increases the risk of developing dental decay, not to mention the emotional impact on sufferers.

Some researchers also believe that the health of our teeth is an indication of the health of the entire skeletal system, so dental fluorosis may only be a small part of a systemic problem.

There is a growing body of evidence to suggest that excess fluoride does indeed affect bone health by increasing risk of fractures, stiffness, joint pain and even osteosarcoma (bone cancer).

Other harmful effects of fluoride include displacement of iodine in the body leading to thyroid dysfunction and disruption to neurodevelopment in children.

Research reviews as recent as 2012 have found that high fluoride exposure in children is linked to significantly lower IQ scores in comparison to children living in lower fluoridation areas.

A range of chemicals are used to treat ‘raw water’ in distribution plants to control algae and microorganisms, remove turbidity and colour, control taste and odour, disinfect, reduce pesticides and contaminants, regulate pH and control corrosion in water distribution systems.

Chlorine, a common disinfectant, is effective for killing bacteria yet can have toxic effects on humans. Chronic exposure to, and ingestion of chlorinated water is linked with allergic skin and respiratory reactions as well as increased risk of bladder and colon cancer.

When chlorine reacts with organic matter such as decaying leaves in water supplies, over six hundred identified DBPs are produced including four primary toxic compounds such as chloroform, that are collectively termed the trihalomethanes.

Research into the effects of these compounds on human health is still in its early stages, however devastating effects such as increased risk of cancer development and birth defects following pre-natal exposure have already been recognised.

Water contamination can occur from manures, fertilisers and pesticides used in the Agricultural practices of non-organic foods.

Most of the added fluoride in our water systems is formed as a by-product of the fertiliser industry, so it is often contaminated with heavy metals such as lead, mercury, and arsenic.

The use of chlorine as a disinfectant also has an acidifying effect on water which leaches heavy metals including lead, aluminium and copper into water supplies from distribution pipes.

Heavy metal exposure is extremely serious, especially in children, as metals such as lead have been found to have debilitating and permanent effects on children’s growth and brain development.

Emed offers a non-invasive Heavy Metal Toxicity Hair Analysis for children and adults if exposure to heavy metals is a concern for you and your family.

Microbial contamination of water supplies can occur as a result of flooding, overflow or accidental seepage of sewage into our waterways.

In Australia, Blue-Green algae outbreaks are also common, and can lead to diarrhoea and stomach problems, particularly in children drinking contaminated water.

To prevent microbe caused public health outbreaks, water treatment is a necessary process. However less toxic disinfection processes such as ozonation should be implemented rather than continued use of chlorine and similar chemicals. 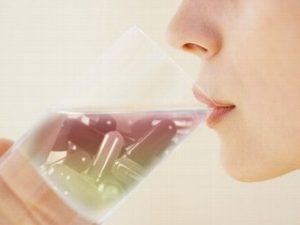 Scarily enough, industrial byproducts and disinfectants are not the only chemical contaminants of public water supplies, as drinking water has also been found to contain traces of a wide range of pharmaceutical drugs and endocrine-disrupting chemicals.

Although usually only found in trace amounts, toxic water contaminants still pose serious public health risks, especially to people with increased chemical sensitivity or those with a reduced ability to detoxify.This includes infants and children, the elderly, individuals with chronic disease or compromised immunity, eg. AIDS or cancer patients.

Even healthy adults drinking from public water supplies over a lifetime are likely to suffer negative health effects from contaminants, as they accumulate in our bodies over time.

While the information in this article may be somewhat alarming, it brings necessary awareness to the potential health dangers of tap water; a substance we are exposed to every single day of our lives, whether it be drinking it, washing in it, washing our food or utensils in it or cooking with it.

Before swearing off water forever, rest assured there are some easy changes you can make to ensure you continue to reap the many benefits of water consumption without the nasties.

Top Tips for Improving Your Water Quality and Health

1. Invest in a Water Filter For Your Home Water Supply

This is the most efficient way to ensure you and your family are getting the best quality drinking water possible.

Unfortunately, these systems can be costly. Alternative filtration systems include sediment and carbon block filters to reduce water sediment, chlorine, DBPs and pesticides. These systems are more economical but do not completely remove fluoride and heavy metals from water and need to be replaced fairly regularly.

Installing shower head and bath faucet filters can be beneficial to people with allergies and chemical sensitivities, as chlorine is known to exacerbate skin conditions such as eczema and dermatitis via topical exposure.

The reason for avoiding hot tap water is that heating water increases the level of heavy metals (lead, copper and aluminium) leached into your water supply from distribution pipes and/or gas hot water tanks.

Also avoid using kettles that have exposed elements to heat water as this is another source of metal contamination.

3. Flush Taps Through For a Few Minutes Before Using Water

Depending on the type of piping in your house, flushing tap water, especially when taps have not been used for six hours or more, can help to reduce exposure to heavy metals entering your water supply from domestic piping.

If water is coming out of your taps at home coloured in either a bluey-greenish or rusty-yellow tinge, it is likely that your piping is corroding and releasing toxic compounds into your water supply.

In this case, it is a good idea to get your water quality tested and take appropriate action.

Apart from drinking water, fluoride is found in other water-based beverages and is added to toothpaste, mouthwashes and some medications. When swallowed, this contributes to accumulation of fluoride in body tissues and subsequent health problems.

To avoid excess exposure to fluoride, use natural alternatives to fluoridated dental products such as our Thursday Plantation Tea Tree Toothpaste and Mouthwash.

It makes sense that the higher your toxic exposure and burden is from other sources, the less likely your body will be able to cope with additional toxins from tap water.

So while it is important to improve the quality of your own water, it is also essential to make more health and environmentally-friendly lifestyle choices. As discussed, industrial pollution and agricultural pesticides and chemicals are not only bad for the environment, they impact negatively on our drinking water supplies and our health.
Start off simply with small changes to reduce your personal and environmental toxic load, such as choosing organic food over non-organics, avoiding plastic packaging and using chemical free washing aids and cleaners.

For More Practical Ideas About How to Improve Your Living Environment and Family’s Health, Check out “Healthy Home, Healthy Family”, by Nicole Biljlsma.

Centers for Disease Control and Prevention, 2012, Disinfection By-Products and the Safe Water System