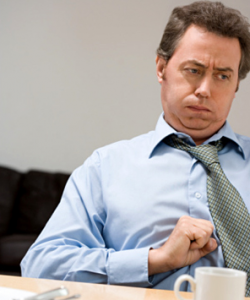 You may have to rethink those heartburn drugs according to research  released in the Journal of American Medical Association Neurology on the 15th February 2016.

German researchers have determined there is an association between a popular class of heartburn medications and dementia.

The research focused on proton pump inhibitors (PPIs) which work by lowering the amount of acid produced by the stomach. Examples include omeprazole (Losec), esomeprazole (Nexium), rabeprazole (Pariet), pantoprazole (Somac) and lansoprazole (Zoton).

The study found after examining  the medical records of more than 73,000 patients that people 75 years of age or older who regularly take the medications had a 44% increased risk of dementia, compared with seniors not using the drugs.

PPI Use in Australia

PPI use has increased by more than 1000% in Australia with over 19 million prescriptions in the 2013–14 financial year.

Over the last decade, at least two PPIs (esomeprazole and pantoprazole) have featured in the top 10 most prescribed Pharmaceuticals Benefit Scheme (PBS) subsidised medicines every year.

How PPI Use May Lead to Dementia

Researchers are not certain how PPI use leads to dementia. However some common theories are:

Other Consequences of using PPIs

PPIs block the production of stomach acid which in itself is problematic as stomach acid helps digest food and has a barrier function against different pathogens.

Commonly prescribed for gastro-oesophageal reflux disease (GORD) some reports have linked PPI use to increased risk of  acute interstitial nephritis and a 20% to 50% higher risk of chronic kidney disease!

Stomach acid helps digest food. So with a reduction in stomach acid, it can make it hard to absorb vitamins (notably vitamin B12) , minerals (especially magnesium) and other nutrients you need from your food — including nutrients that keep bones strong and prevent fractures.

When there is less stomach acid, it leaves people vulnerable to nutritional deficiencies and infections, including food poisoning like salmonella, a potentially life-threatening  infection in the digestive system called Clostridium difficile, and even pneumonia.

As an interesting aside, earlier studies have also linked another type of antacid, H2 blockers, with an increased risk of dementia.

Common H2 blockers include cimetidine (Tagamet), famotidine (Pamacid), nizatidine (Tazac) and ranitidine (Zantac). This is believed to occur due to H2 Blockers reducing vitamin B12 absorption.

Since vitamin B12 deficiency may cause cognitive impairment, dementia or delirium, prolonged inhibition of gastric juices from antacid medications may increase the risk of neurobehavioral symptoms.

Studies have shown that some people are twice as likely to develop cognitive impairment and a decline in cognitive functioning.

Many people take PPIs when they don’t really need them and many people stay on them a lot longer than they need to.

According to a study published in January in the journal JAMA Internal Medicine 25% of long-term users of PPIs could stop taking the medication without suffering increased heartburn or acid reflux.

PPIs are supposed to be taken for two to eight weeks, although doctors may recommend an extended period of time.

People who want to ease off PPIs can take a number of steps to reduce excess acid or prevent acid reflux. These include:

For more tips on healing heartburn naturally read this article.

In an editorial accompanying the study’s publication, University of Pittsburgh’s Lewis Kuller wrote: “Whether PPIs actually cause an increase in the risk of dementia is therefore an important question requiring further evaluation … this is a very important issue given the very high prevalence of pharmacological drugs’ long-term use in elderly populations that have a very high risk of dementia.”

The fact that German researchers have determined there is an association between PPIs and dementia (a 44% increased risk) is indeed food for thought.

For a medication that is only supposed to be taken in the short term and that there are other effective techniques and lifestyle modifications to manage heartburn, begs the question – are PPIs really necessary?