Spinning Out Of Control 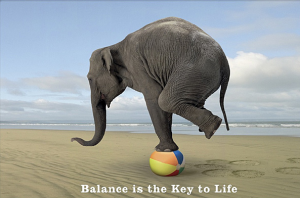 We don’t normally have to consciously think about balance control. It’s an automatic function.

Most people don’t find it difficult to walk across a gravel driveway or get out of bed in the middle of the night without stumbling.

However, with impaired balance such activities can be extremely fatiguing and sometimes dangerous.

Balance is the ability to maintain equilibrium against the force of gravity.

A properly functioning balance system allows humans to see clearly while moving, determine direction and speed of movement, and maintain posture and stability in various conditions and activities.

The Main Parts of the Balance System are:

Vestibular systems in the inner ear

The vestibular apparatus plays one of the most important roles in the balance system. It constantly measures our body’s position in space, relative to gravity, and is the only organ in the body dedicated exclusively to balance functions.

The inner ear, imbedded in the bone behind each ear, actually has two functions: hearing and balance.

The vestibular system, is made up of three semicircular canals and the otoliths. The otoliths (Greek for “ear rocks”) are crystals of calcium carbonate attached to hair cells as gravity orientation receptors.

When a person’s head rotates, fluid moves in the canals, exciting minute hair cells.Those cells send signals to the brain that tell it in what direction, how fast, and how far the head is moving.

The eyes send visual signals to the brain about the body’s position in relation to its surroundings.

Movement and Position Detectors in our Joints and Muscles

Our proprioception sensors are in the joints and muscles.

They allow us to sense the position and movement of our limbs and tell the brain if you’re standing on solid ground, soft, slippery or uneven surfaces. It explains how we are able to close our eyes and still know what our body is doing.

Maintaining balance depends on information received by the brain from the eyes, muscles and joints, and vestibular organs. All these sources send information to the brain in the form of nerve impulses from special nerve endings called sensory receptors.

If there is a dysfunction with one of these components it can become difficult to maintain balance.

The sensory impulses originating in the neck and ankles are especially important. Proprioceptive cues from the neck indicate the direction in which the head is turned.

Many people retain a good sense of balance despite inner ear problems due to the complementary support provided by the eyes, and movement and position detectors in our joints and muscles.

What May Cause Imbalance:

Nerve cells in the vestibular system degenerate as we age.

Prioproception, muscle and bone strength also decrease, resulting in a feeling of disequilibrium.

Simply growing older can bring about changes in your body that could cause imbalance. Sedentary life style, diseases of the eyes (glaucoma and cataracts), side effects of medications, atherosclerosis, and diseases of the bones and muscles, can all cause dizziness, vertigo, and a feeling of imbalance, which could result in a fall. Stenosis (narrowing) of the cervical spine can also cause loss of balance.

It’s important to rule out the possibility of a more serious condition, such as stroke or tumor, which can cause balance problems.

Scientists are looking at the molecular mechanisms that regulate the development of the inner ear and have identified a gene that encodes a protein which helps in the formation of the semicircular canals and their related sensory tissue.(1)

Another study has identified a family of genes, which help form otoconia (calcium crystals within the inner ear). This study could help researchers determine if otoconia destroyed by aging, medications, infections, or trauma can someday be regenerated in humans with balance problems. (1)

Benign positional vertigo (BPV) represents a disorder of the vestibular proprioceptive system and is the most common cause of vertigo.

BPPV involves intense, brief episodes of dizziness associated with moving the head, often on turning over in bed or sitting up in the morning.

It occurs when tiny calcium carbonate crystals (otoconia) break loose and fall into the wrong part of the semicircular canals in the inner ear. This gives a false sensation of spinning (vertigo).

The cause of BPPV is not known, but it may be a natural result of aging, and can come with head trauma.

2. Cervical Vertigo may be associated with head or whiplash injury. The cause can be a vascular compression in the neck or abnormal sensory input from neck proprioceptors (nerves that sense movement and vibration).

Some people experience nausea or vomiting when travelling in a boat, car, amusement park ride or airplane.

4. Labyrinthitis is a viral or bacterial infection of the vestibulocochlear nerve in the inner ear. The labyrinth becomes inflamed resulting in symptoms of vertigo, dizziness, disequilibrium, nausea, and hearing changes.

The labyrinth sends information to the brain in regard to the position of your head. The disturbance in the inner ear can lead to distorted information being sent to the brain. The onset of symptoms is usually very sudden and may last several weeks.

5. Ototoxicity is a balance disorder or hearing loss caused by certain medications (antibiotics, aspirin, diuretics) that can damage the inner ear.

Many environmental chemicals such as mercury, lead, and carbon monoxide have been linked to balance problems. Symptoms range from a feeling of imbalance, tinnitus, and complete hearing loss. The damage is usually irreversible but vestibular rehabilitation can be helpful.

Hair Mineral Analysis, available through E-med, is a non-invasive test to identify over-exposure to toxic metals.

6. Vestibular Migraine can cause vertigo that can last from a few minutes to days.

Attacks may be triggered by quick head turns, being in a crowded or confusing place, driving, riding or even watching movement on TV. Vestibular migraine may also cause unsteadiness, hearing loss, and ringing in the ears (tinnitus).

7. Meniere’s Disease is a balance disorder caused by large amounts of fluid collecting in the inner ear. Usually, only one ear is affected. The cause of Meniere’s disease is unknown.

The disease is usually characterized by attacks of vertigo (spinning) that can last form a few minutes to hours. Hearing loss and head noise (tinnitus), violent spinning, whirling, and falling associated with nausea and vomiting are common symptoms. Sensations of pressure and fullness in the ear or head are usually present during the attacks.

The person may be very tired for several hours after the overt spinning stops.

Meniere’s disease has also been linked to migraine. Often triggers will precipitate an attack, such as certain foods, changes in pressure, fatigue, anxiety, or other illnesses.

8. Perilymph Fistula is an abnormal opening between the inner ear and middle ear, causing leakage of fluid. It can occur after head injury, surgery, drastic changes in atmospheric pressure (such as when scuba diving), chronic ear infection, physical exertion, or without a known cause.

Its most notable symptom, besides dizziness and nausea, is unsteadiness when walking or standing that increases with activity and decreases with rest. Some babies may be born with perilymph fistula, usually in association with hearing loss that is present at birth.

Simple Balance Training Exercises You Can Do at Home

Almost any type of physical activity improves your ability to balance.

Regular exercise improves your sense of equilibrium, the strength of your stabilising muscles, and general coordination.

Always start with a warm-up: roll your shoulders for a minute or so to loosen them up.

A study published in the British Medical Journal, revealed that the exercises, such as turning your head right to left and back again or nodding your head up and down, led to reduced dizziness within a matter of weeks of starting, and the benefits lasted for at least a year.(2)