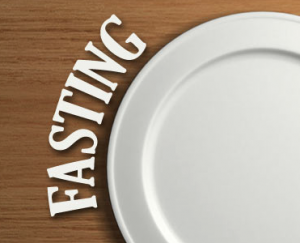 It’s a contentious topic that has its supporters on both side of the fence.

However fasting, in its various modes has an impressive number of clinical studies to back up its efficacy in reducing the impact of a number of conditions.

Contrary to popular opinion, fasting does not refer to simply not eating. There are a number of different methods of fasting, ranging from reducing calorie intake, water only for a period only, to fasting with restriction of calories on certain days. Here are a few of the more popular types of fasting:

Humans have evolved in an environment where there were periods of feast and famine. Out of necessity our ancestors ate intermittently and were dependant on food availability. The ability to function physically and mentally for extended periods of time without food or with minimal food was of fundamental importance during our evolution and our success as a species.

We are inherently equipped for fasting!

Depending on body weight and composition, the ketone bodies, free fatty acids and gluconeogenesis* allow the majority of human beings to survive 30 or more days in the absence of any food.

*Gluconeogenesis is a metabolic pathway that results in the generation of glucose from non-carbohydrate sources.

What is known is that fasting enhances detoxification pathways and reduces the inflammatory impact of modern diets and eating.

***Adiponectin is a protein which in humans is encoded by the ADIPOQ gene. It is involved in regulating glucose levels as well as fatty acid breakdown.

***Ghrelin, the “hunger hormone”,  is a peptide hormone produced by ghrelinergic cells in the gastrointestinal tract which functions as a neuropeptide in the central nervous system.

Water only and other forms of prolonged fasting have been shown to have significant effects on lowering hypertension. An average of 13 days of water only fasting resulted in systolic blood pressure being reduced to below 120 in 82% of subjects with borderline hypertension with a mean 20mm Hg reduction in BP. Blood pressure remained significantly lower compared to baseline even after subjects resumed their normal diet for an average of 6 days.

Local inflammation found in cells (located in the brain’s hypothalamus) that control energy intake and expenditure may contribute to a sustained positive energy balance in metabolic syndrome. Fasting results in a lowering of insulin and leptin levels and an elevation of adiponectin and ghrelin levels. By increasing insulin and leptin sensitivity, suppressing inflammation and stimulating autophagy (see below), fasting reverses many of the major abnormalities of the metabolic syndrome.

Fasting improves the outcomes of those individuals with rheumatoid arthritis.

Recent evidence from clinical trials show that medically modified fasting is useful in the treatment of chronic pain syndromes. Patients with fibromyalgia frequently report that elimination diets and skipping meals alleviates their symptoms.

Autophagy is a normal physiological process that deals with destruction of cells in the body.

When humans eat meals on a regular and consistent basis, cells receive a steady supply of nutrients and consequently remain in a growth mode in which autophagy is prevented. The nutrient responsive mTOR pathway, a pathway that is important in regulating the cell cycle, negatively regulates autophagy. Accordingly fasting has been shown to inhibit the mTOR pathway and stimulates autophagy in cells of many tissues including liver, kidneys and skeletal muscle. In this way fasting cleanses cells of damaged molecules and organelles.

Essentially CR switches off growth and switches on repair of cells.

Fasting has been shown to improve mood as well as decreasing pain perception.

Cycles of starvation were as effective as chemotherapeutic agents in delaying progression of different tumours and increased the effectiveness of these drugs against melanoma, glioma and breast cancer cells.

Although CR is effective for weight loss in some individuals, many people find this type of dieting difficult as it requires vigilant calorie counting on a daily basis. People also grow frustrated with this diet as they are never able to eat freely throughout the day. Intermittent Fasting and Alternate Day fasting are equally as effective as CR for weight loss, insulin sensitivity and cardio-protection and should be advocated due to their efficacy.

With demonstrated improvements in brain activity, cardiovascular system, mood, chronic pain conditions and gut health, sensible and supervised fasting techniques can not be ruled out as a valid treatment adjunct in a number of conditions.

There are a number of different ways to fast; four have been outlined in this article. However fasting is not a concept that should be adopted without due care and diligence. If this is your first time fasting, seek the assistance and supervision of a trained practitioner such as those at Emed to make sure that this is right  for you.

Our initial consultation is free.