Nurofen, Stomach Ulcers and Bleeding From the Bowel 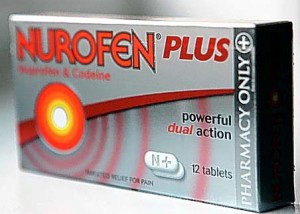 One of Australia’s biggest-selling headache pills could soon be as difficult to buy as morphine or methadone after an expert committee was flooded with complaints the pills were being abused by addicts and drug dealers.

Nurofen Plus, bought over the counter for toothache and period pain, could be made a Schedule 8 drug, a category that includes some of the most addictive medications on the market, the National Drugs and Poisons Scheduling Committee foreshadowed yesterday.

The news comes days after the committee decided that 15 cough medicines would be rescheduled as prescription medications because of concerns about their side effects and the way parents used them.

Nurofen Plus, which contains 200 milligrams of ibuprofen and 12.8 milligrams of codeine, is thought to be used by about half of all adult Australians.

It is the strongest over-the-counter painkiller on the market and has been blamed for a spate of hospital admissions where codeine addicts have taken up to 24 tablets a day, not realising the medication’s other active ingredients, ibuprofen, a non-steroidal anti-inflammatory, can cause ulcers in the stomach and duodenum.

The committee is also investigating reports that codeine in the tablets is being extracted by manufacturers of illicit drugs.

An article in The Medical Journal of Australia earlier this year reported misuse of Nurofen Plus was a “significant” problem and outlined two cases of patients with perforated ulcers from consuming up to a packet a day. A British woman, Linda Docherty, 49, died in March last year after taking up to 64 tablets a day for two years.

Click here to read the article about the death of Linda Docherty: “Mother died after developing 48-tablet-a-day addiction to Nurofen Plus”.

What are we doing? Nearly half of all adult Australians using Nurofen Plus?

Not sure where they got their figures from, but half of all adults seems extraordinarily high.

Generally you have pain for a reason. Pain is the body’s warning mechanism that something is wrong.

Always try to address the cause of the problem rather than masking the symptoms.

The most common side effects from ibuprofen are rash,ringing in the ears, headaches, dizziness, drowsiness, abdominal pain,nausea, diarrhea, constipation and heartburn.

Ibuprofen, a non-steroidal anti-inflammatory (NSAID) can reduce the abilityof blood to clot and therefore increase bleeding after an injury.

Ibuprofen causes ulceration of the stomach or intestine, and theulcers may bleed. Sometimes, ulceration can occur without abdominalpain, and black, tarry stools, weakness, and dizziness upon standing(orthostatic hypotension) due to bleeding may be the only signs of anulcer.

Individuals taking oral blood thinners or anticoagulants, for example,warfarin (Coumadin) should avoid ibuprofen because ibuprofen alsothins the blood, and blood thinning may lead to excessive bleeding.

People who are allergic to other NSAIDs, including aspirin, should notuse ibuprofen. Individuals with asthma are more likely to experienceallergic reactions to ibuprofen and other NSAIDs.

Ibuprofen should be avoided in late pregnancy due to the risk of premature closure of the ductus arteriosus in the foetal heart.

Fluid retention(oedema), blood clots, heart attacks, hypertension and heart failurehave also been associated with the use of NSAIDs.

So be careful with the continued use of all forms of ibuprofen – including Nurofen!

Nurofen Plus however causes more complications because of the addition of codeine.

Codeine is an ingredient contained in many analgesicproducts for back pain, period pain, headaches and migraines. Theproblem is that codeine can be VERY addictive, particularly when it’s used inlarge amounts or for a long time. Codeine can have terrible side effects,including liver damage and heart failure.

So Nurofen Plus has all the problems associated with ibuprofen, as well as the addictive properties of codeine.