Caffeine is the most popular and widely used drug in the world.

It is found in coffee, tea, cola nut, cocao pod, guarana, yerba maté, and energy drinks. It can also be produced synthetically and added to food, beverages, supplements, and medications.

Caffeine has been used as a stimulant for a very long time. There are records of tea drinking in 2737 BC and coffee drinking in 1000 AD. The practice of drinking coffee began in Ethiopia.

Coffee is one of the most commonly consumed beverages and contains the highest amount of caffeine amongst all caffeinated drinks.

What we actually drink is a “tea” made from coffee. The part of the plant that brings us this brew is the kernel of a ripe dried coffee berry. Roasting makes the beans less acidic and improves the aroma and the flavour.

Caffeine can help us feel more alert and think more clearly, but this effect is short lived: we quickly build up tolerance with regular use and become physically or psychologically dependent, or both, on caffeine.

More and more of the drug is then needed to achieve the same amount of alertness.

If you are like most people who drink coffee or tea regularly, you already know you need a certain minimum amount of caffeine to get through the day – and that’s addiction.

If you are addicted, you are not alone. Addiction to caffeine is widespread in our workaholic society.

It makes us ignore the body’s request for some downtime and allows us to drive ourselves ever more frantically.

When we rely on stimulants for energy, we never get to check in with how we really feel. Are we sleeping well or eating well?

People are affected by caffeine in different ways, depending on their size, age, medications, general health, and the amount taken. Some people are more sensitive to its properties than others and have to adjust their intake as a result.

The caffeine content of a cup of coffee depends on how big the cup is, how finely the coffee is ground, how dark the roast, the brewing method used, how much coffee is used to make the drink and the type of coffee bean used.

The Effects Of Caffeine On The Body

Caffeine is both water- and lipid-soluble, and slips effortlessly across the blood-brain barrier—a sort of filter that prevents bacteria, viruses, and most drugs from entering the brain. It has a chemical structure similar to that of the neurochemical adenosine.

Once inside the central nervous system, caffeine is believed to plug up the receptors of adenosine and in this way, the sleep-inducing effect of adenosine is blocked, promoting our lovely “coffee buzz.”

Caffeine is classified pharmacologically as a stimulant, a cousin of cocaine and amphetamines.

It signals the body to produce adrenaline, and shocks your body into a “fight-or-flight” mode.

It temporarily increases alertness and quickens your ability to react to threatening situations.This can cause nervousness, irritability, increased heart rate and blood pressure, and tremors.

Overindulgence in coffee, due to caffeine addiction, can increase the risk of heart disease, heart attack, stroke, and deep vein thrombosis.

Cafestol, a diterpene present in unfiltered coffee, is the most potent cholesterol-elevating compound known in the human diet. Several genes involved in cholesterol homeostasis have previously been shown to be targets of cafestol, including cholesterol 7α-hydroxylase (CYP7A1), the rate-limiting enzyme in bile acid biosynthesis.

Caffeine can cause a vicious cycle of problems in the long term. For example, once caffeine-induced adrenaline wears off, you face fatigue and depression.

Another cup of coffee or energy drink can get the adrenaline flowing again, but having your body in a state of emergency, jumpy and irritable all day long, isn’t very healthy. 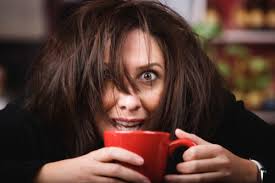 Women generally metabolize caffeine faster than men. Smokers process it twice as quickly as nonsmokers do.

Caffeine has been reported to improve the performance of some athletes at a professional level. However, most people will not benefit from consuming caffeine before participating in sport. The consumption of caffeine before or during exercise may cause dehydration This is because caffeine is a diuretic (meaning it increases the production of urine).

After 5 hours, half of the caffeine you ingested has been metabolised; after 10 hours, 1/4 of the caffeine is still there—hence potential for a sleepless night if consumed too late in the day.

According to a study published in The Medical Journal of Australia, a growing number of people are reporting caffeine toxicity from energy drinks in Australia, especially teenagers.

Caffeine toxicity can mimic amphetamine poisoning, cause seizures, psychosis, cardiac arrhythmias and in rare cases even death. But the most common symptoms reported include irregular or rapid heart rate, tremors, panic attack and confusion, stomach upsets and dizziness.

Pregnant women who consume high amounts of caffeine have increased risk of miscarriage, difficult birth and delivery of low-weight babies.

There is plenty of evidence to show that caffeine, particularly in the form of coffee, decreases fertility. Drinking as little as one cup of coffee a day can reduce your chances of conceiving.

One study showed that problems with sperm: sperm count, motility and abnormalities, increase with the number of cups of coffee consumed each day.

Coffee has an irritating effect on the digestive tract and interferes with nutrient absorption, and can cause heartburn and ulcers.

Caffeine also inhibits the amount of calcium that is absorbed through the intestinal tract and depletes the amount retained by the bones. Studies have shown that women with high caffeine intake suffer more hip fractures than those who avoid caffeine or drink in moderation (1 to 2 cups per day).

Caffeine interferes with the body’s absorption of iron, which is necessary for red blood cell production.

Caffeine has a mild diuretic effect, which increases urination. Water soluble vitamins, such as the B-vitamins and Vitamin C, can be depleted as a result of the fluid loss.

Kicking the Habit and Caffeine Withdrawal

Drinking coffee is a social and cultural phenomenon. It’s a business-meeting staple, an excuse to linger after dinner and talk. And it tastes good. All of which makes it difficult to quit.

A person who is dependent on caffeine is likely to suffer withdrawal symptoms within 24 hours of their last dose. Heavier users who consume more than 600 milligrams of caffeine a day may experience these symptoms within 6 hours.

Dangerous chemicals are used in the production of coffee: poisonous herbicide and pesticide sprays, petroleum based solvents in its decaffeination, and other chemicals to make it instant.

In addition, the oils in coffee easily go rancid, once it is ground.

Therefore ,organic, whole coffee beans, which can be freshly ground as needed is preferable. if you want to use decaffeinated coffee, choose the type that is steam processed.

You can substitute coffee with an equally hot and tasty item, minus the addictive property. You can drink hot herbal tea, eat porridge, or dandelion and chicory coffee.

A few glasses of water or fruit juice can also curb the craving, since you become full. When your body gets used to consuming the substitutes, the addiction to caffeine eventually fades.

By gradually decreasing your intake of caffeine, your body gets used to the lowered consumption, until the craving ends.

The withdrawal stage becomes pretty tolerable, since your body barely looks for caffeine. If you drink three cups of coffee a day then switch to two cups for a week.

Then, switch to one. After your body has adjusted to one cup, then you can make the switch to tea.

Remove All Traces of Caffeine in Your Home and Office

A single sip from a cup of coffee is sometimes enough to build on your addiction.

During your week(s) of detox, plan to get plenty of sleep at night. This will help your body to feel refreshed and you won’t feel as much of a need to down caffeine in order to feel energized.

Apply a timeline for stopping your addiction. Abide by the schedule you set at all costs, which instills discipline and determination in your system.

Quitting caffeine can lead to clearer skin, alleviated stress, lowered blood pressure, and improved mood. Plus, you’ll be more in tune with your body’s natural rhythm and needs.

Stimulants don’t really give us more energy, though they are what many people turn to when they feel too tired. Stimulants create false energy, leaving us more exhausted at deeper levels.